As I write this I am sat cross legged on the ottoman enjoying a nice glass of lactose free chocolate milk. That’s right, chocolate milk that doesn’t make me ill… am I in heaven??

I’ve just planned my Yoga practice for this morning so am letting myself wake up a bit before I dive head first into that. I did a lot of reading on my photography course yesterday, but I’m a bit disappointed as so far it’s mostly teaching me stuff I already know. Hopefully over the next fee weeks it picks up and I can start learning new functions 😊

Monday was a bit more relaxed 😌 Spencer talked me into having Sushi for lunch… I was definitely super sceptical because as previously noted, I’m not into seafood. Guess what, it was amazing!

The walk down to Rutherford was WARM. With the sky a brilliant blue and the sun beaming down on us, I was sure glad I didn’t bring my coat. Could this be the end of the rain and fog?? ☀️

Umi Sushi is the Japanese restaurant to the left of Timmy’s at Rutherford. From the outside I guess it doesn’t look like much, but when you open the door you’re greeted by beautiful pink cherry blossom trees dotted around the room and a light wooden screen separating the restaurant from the entrance. The air is light but fragrant; you can smell the ingredients used to marinade the different meats and fish… it’s really wonderful and my mouth watered instantly!

Both Spencer and I ordered the lunch boxes; I had beef teriyaki and Spencer opted for the grilled chicken. We had the Miso soup to start which was DEVINE. The boxes are super cool and I want to get some for home as they have neat little compartments for each dish and sauce. I didn’t get the best picture of it BUT please see below… 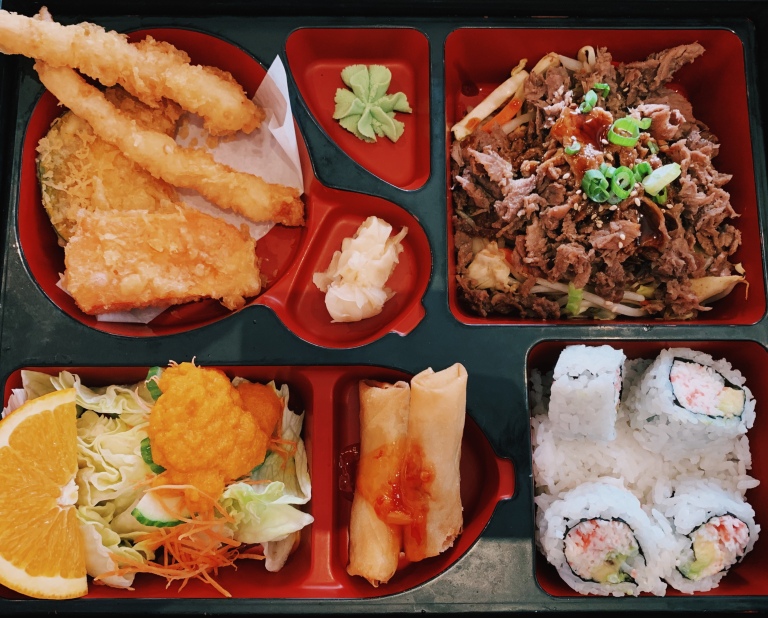 After Sushi we popped into Timmy’s to pick up a hot chocolate and then made our was back to the Oliver Wood’s pond. The fog had returned and Mr Blue Sky was hiding away once more, hopefully not for so long this time.

Monday was odd because Ali was coming back from school just after 1pm, so we couldn’t venture far at all. We sat with the ducks for awhile and watched on as the fog crept across the pond, wrapping itself around anything protruding from the water.

We finished our drinks and were home before we knew it. I think I skipped Yoga that day and I feel bad about it. However, I did clean the kitchen and do a wash so it was kinda productive in the end.

Logan’s birthday was on the Monday but he was a busy bee so I didn’t get to call him. We did have a little video chat on Tuesday though, which made me miss him all the more. I can’t believe it! My little bro is growing up SO fast.

Tuesday also saw that the stompers were back in town, and we set off on what was to be our longest walk to date. First stop, Bohdi’s Artisan Bakery. OOO mumma 🥰 Every time we walk past Bohdi’s we’re like ‘please be open today, please!’. Tuesday was their first day open after the holidays so it was jam packed inside, and my little brain couldn’t bring myself to go in. This meant that Spencer had the task of choosing something for me… CINNAMON BUN.

Blimey, I’ve never seen a cinnamon bun so huge in my life. Still warm from the oven and covered in cinnamonny goodness, it stole my heart from all other buns (yes, even yours John Mayer, even yours).

I only managed half of it so wrapped it up and popped it in my pocket for later. And so we started our descent to Sealand. We definitely took one or two wrong turns but eventually found the place. Actually, I’d already been to Sealand Park when I was here last but it looks so different without all the snow ⛄️ it felt like coming to a new place entirely.

As we walked the steep path down to the beach we noticed a lot of fallen trees. They were also constantly creaking so we made our way through relatively swift; given the storm a few weeks back we weren’t going to trust the stability of the trunks.

The beach was pretty eerie at first as the fog we so thick you could barely see 5 ft in front of you. If I really strained my eyes I could see birds fishing for breakfast in the distance. Climbing over A LOT of driftwood, we shuffled down the beach. The tide was in and the driftwood was just building up the more we moved on, so we decided to just take a moment and relax to the sound of the waves.

We perched on a large log that was obviously recently used as campfire seating, as a sweet rock arrangement made for a great fire-pit.

Spencer tripped a few times on the way back up which I found hilarious because I am mean. I’m used to being the clumsy one so it’s just nice to take the heat off me for a mo!

However, the hill was steep and the steps even steeper. In fact, the steps were never ending and we felt that at the top 🥵

Ricky’s was the chosen lunch spot, about 40 minutes away from where we were. Marching (almost literally) up the hill and past a couple of schools, through numerous closes and drives we finally made it and I chowed down on some chicken tenders…the best chicken tenders if you ask me.

Our legs were so tired but I wanted to pop into Woodgrove, a shopping centre with all kinds of cool clothing shops, tea shops and naturally a huge department store; which, by the way, I intend to buying all my kitchen furniture from.

I avoided Sephora like the plague because it’s too early in the trip to splurge! But I did pop into The Body Shop to pick up some face masks for Gemma and I to enjoy next week.

Before we started our hour long walk home, we did a cool VR rollercoaster thing. 10/10 would recommend.

We drove ourselves so mad on the walk home that we were just saying song lyrics to one another; not singing, saying. Honestly the hills here are so brutal, I suppose that’s what you get living on a mountain covered island.

We walked 22,083 steps, 9.92 miles and climbed 769ft. I was EXHAUSTED and we completely collapsed when we got back to the house.

Alas, my adventures were not over… but today’s story tell is because I am in desperate need of my mat.

I’ll catch you up in the last few days as soon as I can.

Love you and miss you all TRILLIONS.